Those of you who follow my Facebook page noticed an announcement a few months ago. Another of my stories will be released in an anthology. Like A Game of Horns before it, this new anthology will be published by WordFire Press with all proceeds going to the Don Hodge Memorial Scholarship Fund. 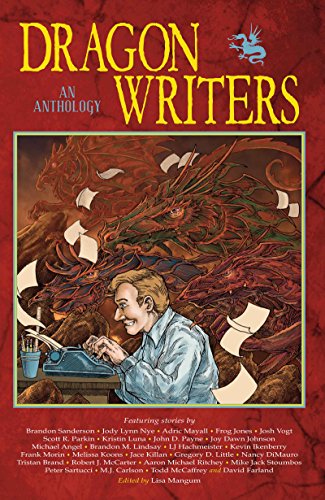 Here is the description from the publisher:

Dragons are creatures of legend. Of magic. Of wisdom, nature, and the power of creation. They have been in every culture and mythology since the beginning of time.

Writers are creatures of legend. With magic, wisdom, and the power of creation at their fingertips. They, too, are in every culture and have been creating their own mythologies since the beginning of time.

Within each writer is the power of a dragon. . . . The power of creation.

Gathered together are twenty-six stories from writers who dared to tame this power, including New York Times best-selling authors Brandon Sanderson, Jody Lynn Nye, Todd McCaffrey, and David Farland. Through fantasy, sci-fi, romance, and poetry, this anthology celebrates the magic and majesty of dragons, writers, and creativity.

Within these pages, you’ll find dragons who fly through space, who raise hatchlings, who carry the power of life and death. Some dragons are even featured as swords, planes, and origami creatures.

Dragon Writers is a special collection where magic and myth combine to create something legendary.

My story, called “Manifest,” is more of a fantasy than “Scrapyard Paradise” was. Pre-orders for the digital versions have already begun (check the Works page for your market of choice), and the release date is November 5th.

I write fantasy novels and stories. My story Manifest was featured in the Dragon Writers anthology, and my story Scrapyard Paradise was in the anthology called A Game of Horns, both of which were published by WordFire Press. I received my Bachelors in Philosophy from the University of Washington in Seattle. My greatest influences are Terry Goodkind, Brandon Sanderson, Robert Jordan, and Steven Erikson. View all posts by Brandon M. Lindsay

I write epic fantasy novels and stories, as well as develop video games. My stories have been published in anthologies featuring authors such as Brandon Sanderson and David Farland and have won multiple awards from the Writers of the Future contest.